Our visit to the Museum of Country Life, Castlebar, took us on a journey back in time to explore the lives of ordinary people who lived between 1850 and 1950. We admired everyday objects used in everyday life.

Our tour guide gave us a brief outline of the time in which these people lived. He noted that after the Great Famine, Ireland’s populations dipped from 8 million to 3 and a half million. This was primarily due to emigration and death by typhoid and cholera. In the 1850s, 90% of land owned by 10% of the people, the landlords. By 1950, these people owned their land.

Our guide went on to explain that complete Home Rule was never granted due to WWI. WWI, which was predicted to last only months, started in September 1914 and didn’t end until 1918. The British had promised Home Rule if the Irish helped them in France but this never transpired. In 1916, some Irish grew tired of waiting and 1500 Irish men staged a rebellion on Easter a Monday. 10000 British soldiers landed within 2 days and the rebels were defeated. We learned that the leaders were executed because they had committed treason but that people, who had initially laughed at the rebels attempts, came round to a new was of thinking. Prior to their deaths, the prisoners had been badly treated. James Connolly, for example, a man in septic shock, was shot by firing squad while he sat on a chair. In 1922, a Treaty was signed giving Ireland the right to govern 26 counties.

Our tour guide then took us through the various types of landscape in Ireland. There are marshes, bog (some of the best bog in Europe, the ecosystem of bogs have disappeared in Europe), mountains, rivers and lakes. Our tour guide showed us how the Irish people lived off the land. They may only have received on average a two year education in the 1920s but they were a very intelligent people. He showed us kish baskets made from dock stalk, bramble basket made using brambles and lobster pots made from willow or sally rods. Sometime lobster baskets were made from heather to cover the scent of bait in lobster pots. We saw chairs made from straw. They only lasted a year as they often became a heaven for pests but the new harvest every year brought replacements. The three main harvests were the turf, the potato and the seal harvest.

Our guide told us that willow used be cut using the coppicing technique. It was cut at the root so that the branches would grow tall, thin and flexible for crafts. We saw a cradle made from driftwood on the Aran islands. The bottom of it was made from willow (the people of Aran would’ve used seaweed as fertiliser in those days). We also saw a wooden cradle made in Roscommon.

Common trades of the century in question included the tin smith, shoemaker, carpenter, basket maker, wheelwright, blacksmith, the wood turner, the shopkeeper, the teacher, the thatcher and the cooper. The tin maker was very important at the time are they served as a form of communication system between towns. They often brought stories and new dance steps from place to place. 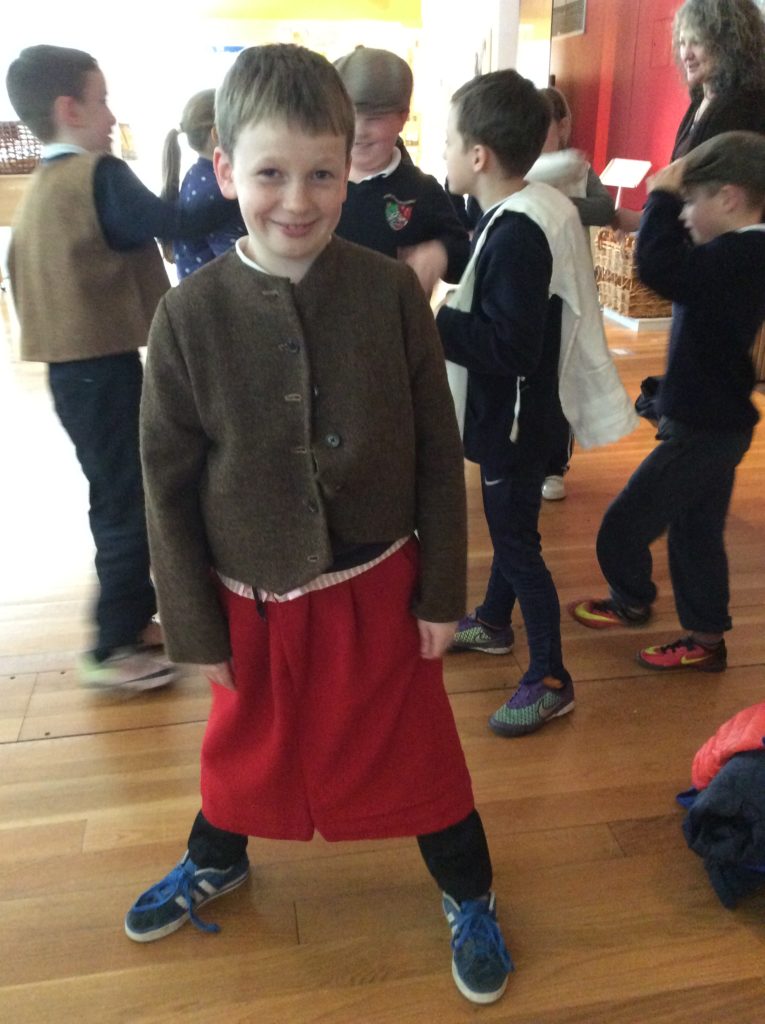 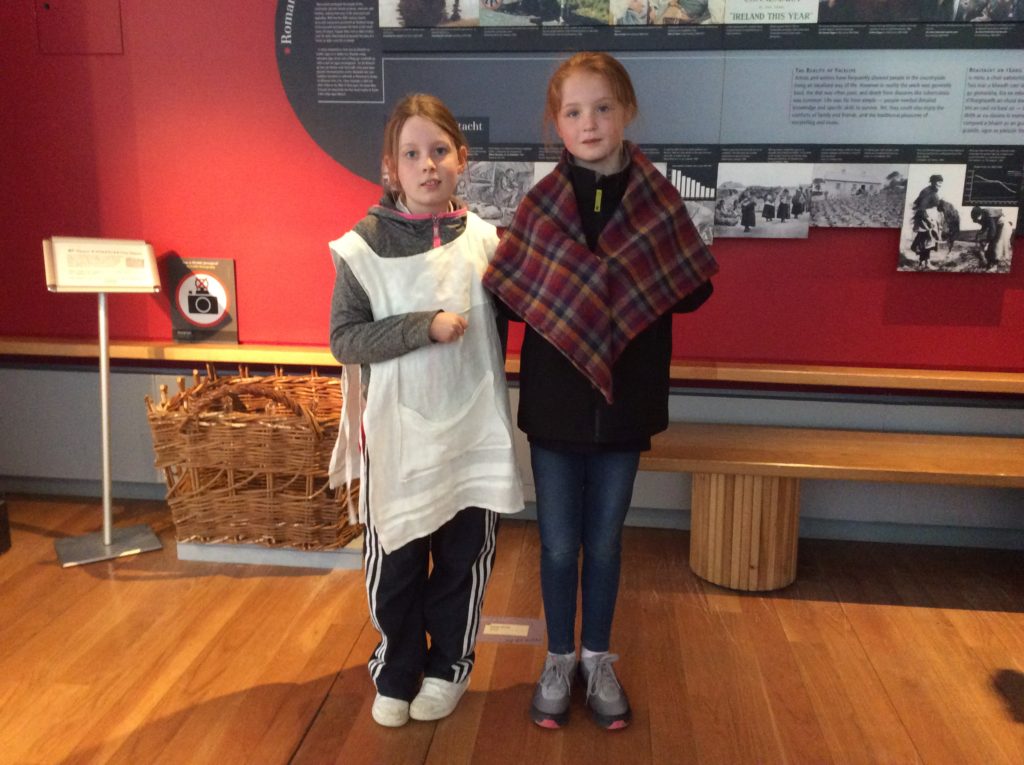 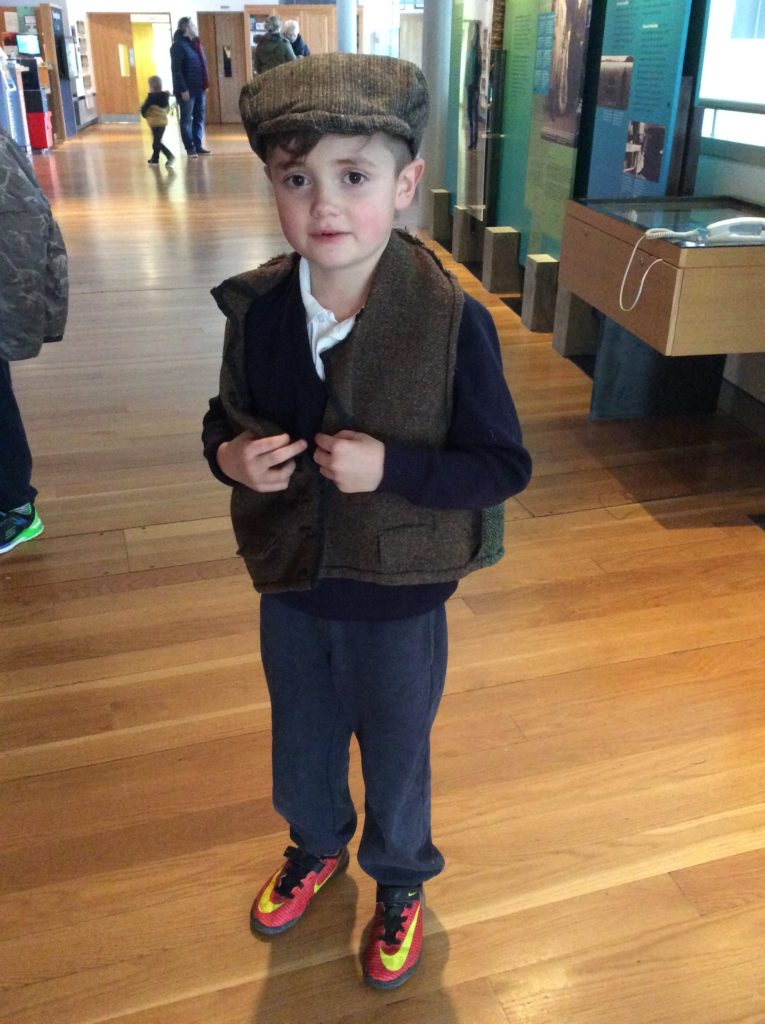 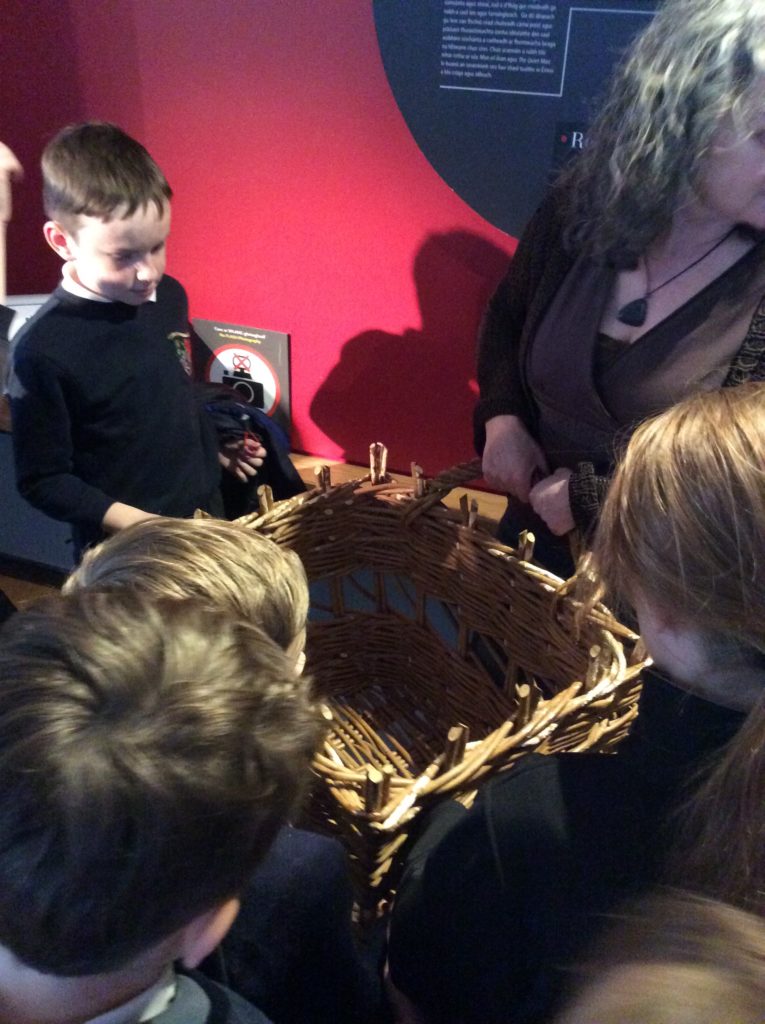 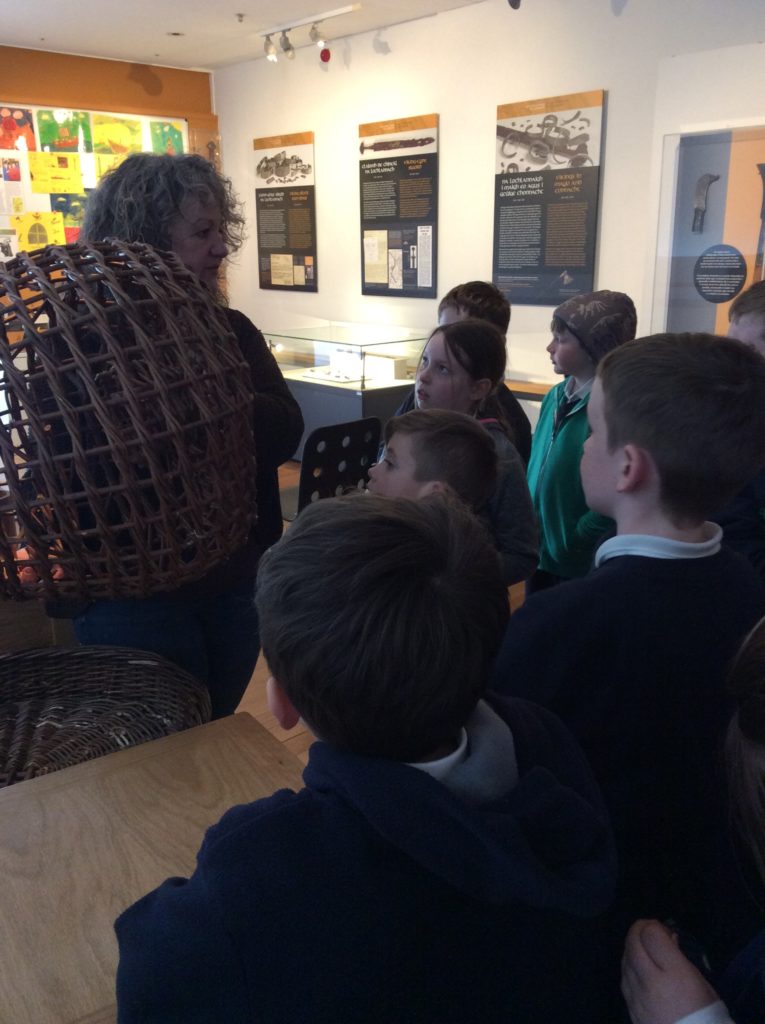 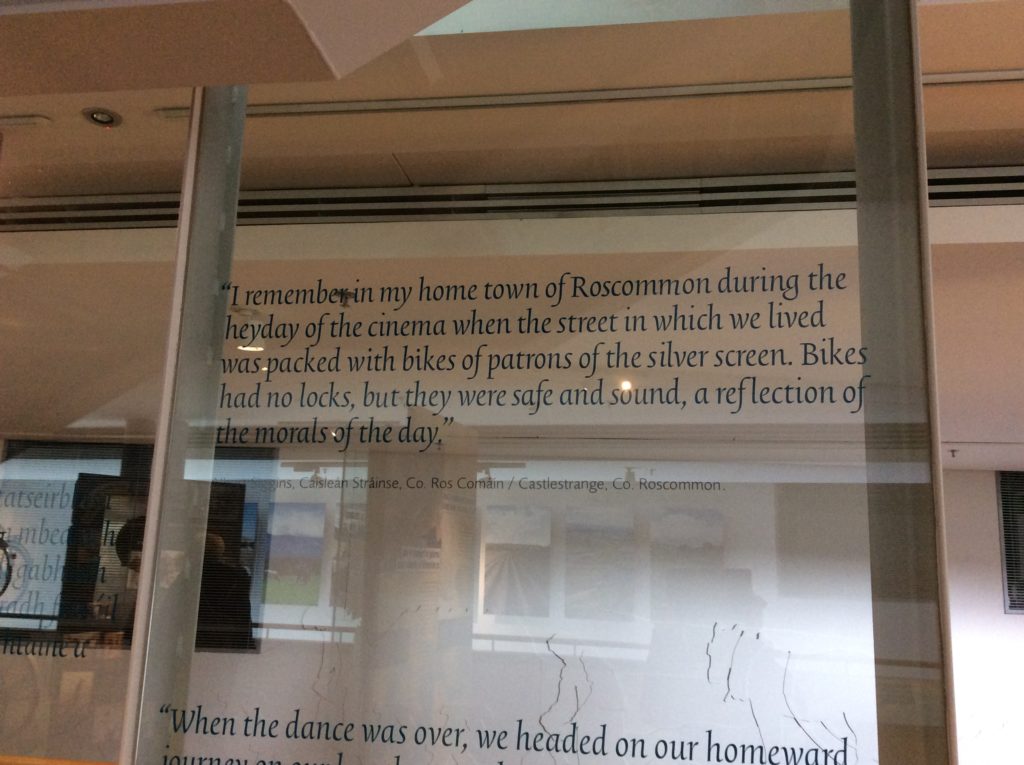 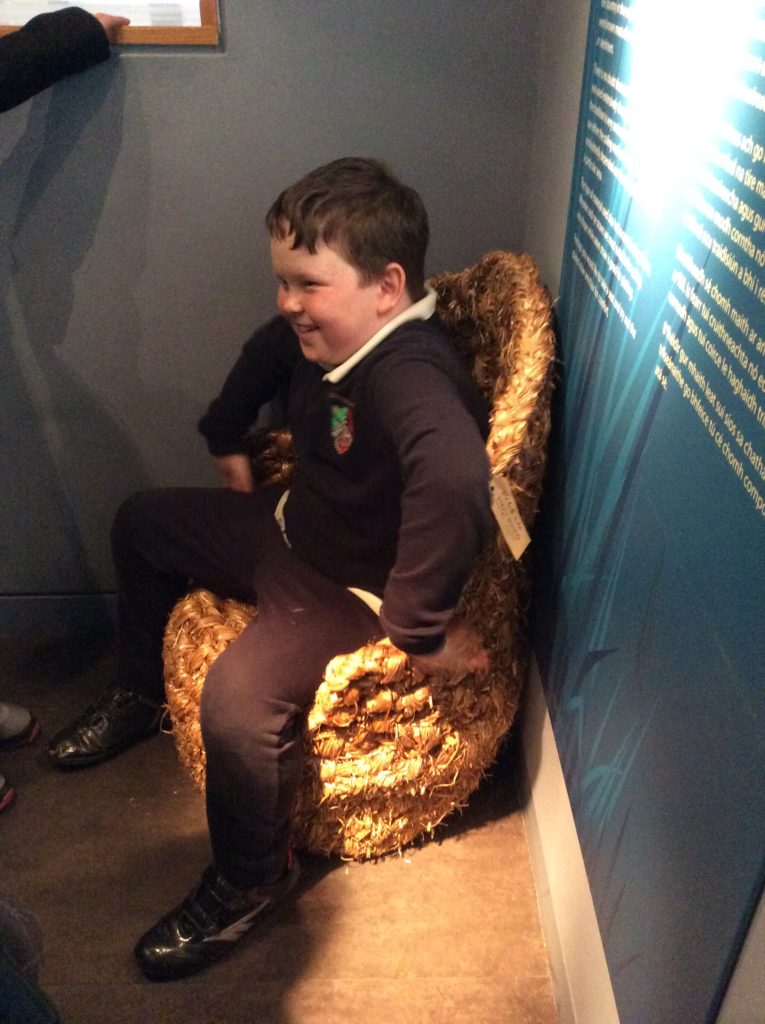